Allegany Nature Pilgrimage
Visit the Virtual ANP page for descriptions of online programs to be offered on May 28-31, 2020

Joe Barron
Joe is a graduate of Cornell University and a current master’s student a Virginia Tech. He worked with various agencies including the United States Geological Survey, the Smithsonian and the Virginia Department of Game and Inland Fisheries. His expertise centers around wetlands and the plants and animals that inhabit them. Currently, Joe is investigating the distribution of bog turtles in Virginia and the factors that are contributing to its decline.

Angela Driscoll
Angela has bachelor’s degree in Biology with a minor in Environmental Studies from SUNY Geneseo.  She received her Masters in Botany at Miami University of Ohio, conducting spatial studies on invasive plants for my thesis. After grad school, she worked at WNY Partnership for Regional Invasive Species Management, primarily conducting surveys and managing invasive plants. She also taught a Great Lakes Education Program through Cradle Beach in various Buffalo schools.  She currently works as a Wetlands & Waters Ecologist at the NYS Department of Environmental Conservation, focusing on wetland permitting, compliance, and conducting wetland delineations.

Ken Keffer
Ken is a naturalist and author with a background in wildlife biology. Ken’s rich diversity of research and experiences, from monitoring small mammals in Grand Teton National Park, to studying flying squirrels in southeast Alaska, to catching blue crab off the coast of Maryland has led to the inspiration for his new adult nonfiction release, Earth Almanac: Nature's Calendar for Year-Round Discovery. He has written eight other books highlighting the importance of exploring the outdoors, including The Kids Outdoor Adventure Book, which won a National Outdoor Book Award. As an educator, Ken uses nature as a classroom, teaching people the everyday sounds and lessons the outdoors has to offer. In 2015, Ken was named the Wisconsin Association for Environmental Education’s Nonformal Educator of the Year. When he’s not writing, Ken’s interests include birding, floating on lazy rivers, and fly fishing. Along with his wife Heather, they especially enjoy camping with their dogs Willow the Wonder Mutt and Hazel the Wonder Nut. One of Ken’s favorite childhood memories is building Fort Fishy along Rock Creek at his grandparent’s place. A favorite adult memory is hiking the Thorofare of southeast Yellowstone and exploring the headwaters of Two Ocean Creek like Teddy Roosevelt did. More details and scheduling information can be found at www.kenkeffer.net. 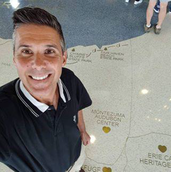 Chris Lajewski
Chris is a passionate conservationist and birder. A native of Pittsford, NY, Chris began his career with Audubon NY in 2010 as the Montezuma Audubon Center’s Education Manager and he was promoted to Center Director in 2014. He graduated with honors from SUNY Albany with a Bachelor's of Science degree in geology and obtained a Master's of Science degree in geology from Syracuse University where he researched human impacts on the Finger Lakes. After college, he worked for an environmental consulting firm, the National Park Service, the Walker Nature Center, and The Nature Conservancy. Chris is a proud husband and father and enjoys hiking, camping, paddling and swimming with his wife and children.

Twan Leenders
Twan is a biologist from The Netherlands interested in animal ecology and conservation management. For more than twenty years his work with birds, mammals, plants and especially tropical amphibians and reptiles has taken him to various places on the planet. As a former researcher at Yale University’s Peabody Museum and other institutions he participated in many international expeditions that helped gather data to better understand and protect biologically important areas and their unique species and habitats. Before coming to western NY, Twan taught biology at Sacred Heart University in Fairfield, CT, and went back into the ‘trenches’ of hands-on conservation research and education while leading the Science and Conservation Office of the Connecticut Audubon Society. As Senior Director of Science & Conservation at the Roger Tory Peterson Institute of Natural History, he now applies his experience to our region and develops new conservation research and education initiatives that aim to spark increased interest in the area’s exceptional natural assets while providing economic incentives to promote good environmental stewardship.

Christopher Myers
Chris is a graduate of geology from the University of Delaware and now works as an environmental geologist in the Northeast. He first attended the ANP in 1992, when he was 6 months old. He comes from a family that has great admiration and appreciation for nature. Chris loves learning and sharing knowledge with others.

Lon Myers
Lon is an avid self-taught naturalist with a lifelong passion for nature. He has led walks at the Pilgrimage for over 45 years including Beginning Birds, Sharing Nature with Children, Family Nature, The Splash Hike, Stream Adventure, and the Night Hike. Lon has served as Chairman of the Pilgrimage and has attended since he was 4 years old. Lon’s programs are always in demand as he has led over 5,000 people on his walks and talks at the Pilgrimage.

Dr. Eric Olson
Dr. Olson has a Masters in Forest Science from the Yale School of Forestry and Environmental Studies, and a PhD in Ecology and Evolutionary Biology from the University of Pennsylvania.  Over the past twenty years, he taught a variety of environment-related courses at Brandeis including Field Biology, Principles of Ecology, Tropical Ecology Seminar, Environmental Impact Assessment, and Climate Change and Development. His specialty is insect-plant interactions including herbivory and pollination. In addition to his academic work, Olson volunteers with the Land Trusts of both the City of Newton and the City of Waltham, and has led dozens of invasive plant management sessions and workshops for these organizations.  He has helped install pollinator meadows on three different sites in recent years, two in Waltham and one in Newton.  Dr. Olson has been a contributor to NPR’s Science Friday.

Marcus Rosten
Inspired after spending many summers camping in green cabins, Marcus attended SUNY College of Environmental Science and Forestry, and graduated with a degree in Environmental Education and Interpretation. Marcus has taught conservation education across the country with the National Park Service and U.S. Forest Service. Currently Marcus is the Aquatic Invasive Species (AIS) Program Manager at the Western New York (WNY) Partnership for Regional Invasive Species Management (PRISM) where he works to protect WNY waters by managing the Watercraft Inspection Stewardship Program and leading efforts addressing other AIS issues including the early detection of priority species. He has also worked locally with New York State Department of Environmental Conservation, with Buffalo Niagara Waterkeeper, and at Reinstein Woods Nature Preserve.

Brittany Rowan
Brittany is an avid birder and naturalist. She has always loved the outdoors, whether she’s hiking, kayaking, or birding with her husband Greg. She is an amateur photographer and particularly enjoys photographing birds, flowers, butterflies, and fall foliage.

Heather Rutherford
Heather earned her North Caroline Environmental Education Certification and MEd in Science Education while teaching fourth and second grades in North Carolina. Back in New York, she is on a quest to become a better naturalist by learning from others and taking time to observe changes and animal behaviors through her photography.

Dr. Holly Schreiber
Dr. Schreiber is currently the Director of Education of the Penn Dixie Fossil Park & Nature Reserve in Buffalo, NY. Previously she held the positions of Postdoctoral Scholar and Lecturer in the Department of Earth and Planetary Sciences at the University of California, Davis, the department where she earned her Ph.D. in 2011. Dr. Schreiber’s dissertation, “Investigating the Phylogenetic Relationships and Morphological Variability of the Crura and External Shell of Extant Rhynchonellida (Brachiopoda),” focused on the variability of brachiopod shell shapes and its effect on their evolution.  Prior to devoting her life to brachiopods, Dr. Schreiber earned her B.S. (2003) in Geology and Geophysics from the University of Wisconsin and an M.S. (2005) in Geoscience from the University of Iowa. Her thesis work focused on the evolution of Caribbean corals during the Cenozoic.

Dr. Karen Schwarz
Dr. Schwarz received her BS in Physics from New Mexico Institute of Mining and Technology and her PhD in Astrophysics from Arizona State University.  Dr. Schwarz is an associate professor in the Department of Earth & Space Sciences at West Chester University.  She also serves as the Director of the Mather Planetarium.  In this role, she presents over 80 shows a year to school groups and the general public. Dr. Schwarz’s scientific research is in the area of interacting binary stars.  In particular, she studies elemental abundances in classical novae.  Recently, she has moved into astronomy education research.  Dr. Schwarz is interested in assessing the impact that informal education settings have on student learning.  Currently, she is investigating how modern planetarium programming can aid students to develop a conceptually accurate understanding of lunar phases. In addition to the above activities, Dr. Schwarz engages in several other education and outreach programs.  For the past 6 years, she has run Super Science Saturday which is a one-day event designed to encourage middle and high school girls to pursue careers in STEM.  Dr. Schwarz is also the director of the West Chester University site for Project ASTRO – a national program that improves the teaching of astronomy and physical science in K-12 classrooms by linking professional and amateur astronomers with local educators. 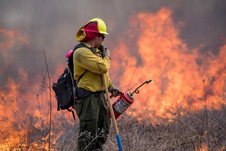 Erik Stefferud
Erik is the Land Stewardship Operations Manager for Longwood Gardens. Erik primarily oversees the facilities Soils and Composting facility and the Prescribed Fire program for the just over 1,000 acre private property. Each year the Soils and Composting facility bring in over 2,000 cubic yards of wasted garden material (green/woody material) and in turn his team creates new from the waste in form of nutrient rich compost and a high quality aged hardwood mulch and returns it to the formal gardens as a finished product. Since starting with Longwood in 2013 Erik has led/worked 50+ burn units scattered across multiple states and fought wildfires in just as many which is where his true passion lies.

Garrett Taylor
Garrett is an amateur mycologist and mushroom photographer: @fungee on iNaturalist, @cappy on mushroomobserver.org. Current member of the following NAMA mushroom clubs: WNYMC, WPaMC, CPaMC, RAMA and MST. Interested in clarifying and cataloging all the diversity we can see with the naked eye.

Keith Williams
Keith is a freshwater underwater naturalist, writer and photographer. He has a BS in Environmental Biology from Kutztown University and a MS in Ecological Teaching and Learning from the Lesley University Audubon Expedition Institute. Keith is the founder of Freshwater Journeys, an outfitter dedicated to connecting people to rivers through snorkeling and has led thousands of people on river snorkeling explorations over the last 15 years. Keith has developed river snorkeling based curriculum and has established freshwater snorkeling programs for non-profits and the US Forest Service. Snorkeling Streams and Rivers: an Aquatic Guide to Underwater Discovery and Adventure is his second book about river snorkeling. Keith is a nationally registered Paramedic and Swift Water Rescue Technician.